Spirit of the Marathon

The LaSalle Bank Chicago Marathon is only weeks away and the excitement keeps building. In the midst of this anticipation, one of my marathoner co-workers forwarded me this trailer for the documentary Spirit of the Marathon. I watched this ten minute clip at least three times and I get inspired every time I press play. It moved me so much; I had to find out more on the creators and about the mission of this moving documentary. While I’m not a marathoner myself (yet) just your normal everyday runner, I was still was brought to tears as I watched this clip. I think everyone can take something from this film. You can watch the trailer here (see link):

A few weeks ago the director of the film, Jon Dunham, answered some questions I had about the movie, the inspiration, the passion that went into production, and the hard work:

Can you tell us how the idea to make the film came about?

Jon Dunham: I ran my first marathon in Los Angeles in 1993 and was instantly hooked. It was the most challenging thing I had ever done and it gave me an incredible sense of accomplishment. It changed my life! Year after year I continued to run marathons and eventually my filmmaking and my running met. I became totally captivated by the subject. The marathon, its history, and the diversity in people who take part in it became an absolute passion of mine. 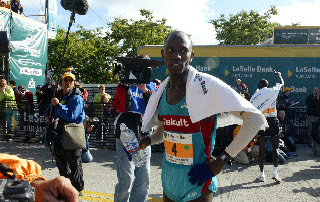 Jon Dunham: Land of the Gods was the working title, which we took from the marathon’s homeland - Greece of course. We debated its actual significance to the film throughout post-production and ultimately decided on Spirit of the Marathon as we felt it better conveyed what the film is all about. It also relates very nicely to one of our epilogues at the end.

What hurdles had to be crossed in order to make it?

Jon Dunham: The most challenging aspects to producing Spirit of the Marathon were the actual logistics to filming a major marathon and securing the necessary financing. Both were a long and arduous process; however, we ultimately received generous support from the Chicago Marathon (although there were other reasons for choosing to structure the film around Chicago as well) and over about a five year period we gradually put together enough funds through sponsors, private donors and investors in order to make it all happen.

The film has been described as featuring 6 runners - was it easy choosing those and under what criteria? 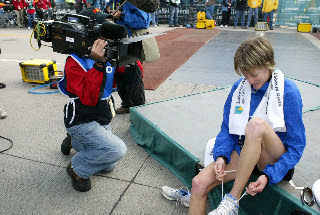 Jon Dunham: One of my first impressions of the marathon was how incredibly diverse it was. I was moved by the spirit of camaraderie among people, runners and spectators alike. I always wanted to address this in a film. Furthermore, I wanted to tell the stories of both professional as well as amateur athletes and to explore the similarities and differences in all of these runner’s lives. Deena was the first involved and we first started discussing the project in early 2004 prior to the Athens Olympics. Once she won the Bronze it added a great deal of luster to her story.

As for the amateurs, we started with a mass casting call that went out across North America and there was a full deluge of responses. Finally, we spent a couple of weekends in Chicago and met with maybe 70-80 people and chose our four from there.

I was introduced to Daniel via the Chicago Marathon and his story spanning multiple continents and supreme athletic talent instantly intrigued me.

The filmmakers have extensive marathon running experience do you think this was a necessity in making the film reach its target?

Jon Dunham: Let me put this another way; To a certain degree I think all marathon runners have the potential to be good filmmakers because the marathon is an extremely demanding event and filmmaking is a very challenging career choice. However, like all things that one must work very hard for in life, there lies at the end tremendous reward.

More literally speaking, I think as a filmmaker you have to know your subject inside and out. Who better to make a film on the marathon than people who have run it themselves? That being said, I never wanted to make a film solely for runners as I believe the lessons learned in training for and running a marathon transcend the sport. Keeping this in mind, I often found myself purposefully trying to avoid “runner’s speak” and hard core details about the history of the event because I knew it would probably end up alienating potential audiences.

When will the film get a general release?

Jon Dunham: We’ll be in theaters in the U.S. in late 2007 and early 2008. We plan to also have a release abroad in 2008. We are still finalizing the details around the mass distribution. However, based on the response we’ve received worldwide, we anticipate the film will be widely available this coming year.

Upon completing this film, what advice do you have for new marathoners?

Jon Dunham: Pace yourself and stick to it. Many things truly worthwhile in life require a lot of passion, patience and perseverance.

So there you have it, from the Director himself; everything worthwhile in life is worth the hard work and passion. Take some time out of your day and check out the Spirit of the Marathon movie trailer. It will be showing through the Chicago International Film Festival October 5, 2007; two days prior to The 2007 LaSalle Bank Chicago Marathon.

Posted by Shop New Balance at 9:33 AM 0 comments
Email ThisBlogThis!Share to TwitterShare to FacebookShare to Pinterest