Yoga: An Added Spice to Running? 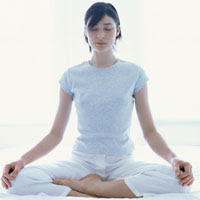 About six weeks ago I signed up for my first yoga class. I've only tried Pilates and in the privacy of my own home, so I was a little intimidated about starting an actual yoga class. I was not very flexible and didn't know much about the benefits. I knew Yoga could help you relax, and who doesn't need help with that? So, one of my friends at work encouraged me to join and sign up with her.

I'm not going to lie, the first class was a little intimidating. The other students all came very prepared and looked like they had been doing the "downward dog" for years! But I showed up, no yoga mat, and in running shoes. So, I took off my socks and shoes, grabbed a mat from the rec closet and joined in. I really enjoyed it. And I felt taller afterwards, it was easier to breathe, and I felt relaxed. My friend who was with me said she felt the same thing.

In the September issue of Runner's World, (page 78) Uta Pippig, (who is also on the cover of the September issue of Runner's World) winner of the Boston, Berlin and New York City marathons, found herself stuck in a rut and in need of an energy boost. She added Yoga to her running workout regime "to regain energy, improve (my) breathing, and (to) find inner peace and satisfaction." I also read that Yoga can help make you stronger and prevent injury with intense stretches, poses, and breathing techniques.

You should check out this other article found on the Runner's World website, it also discusses the running benefits of Yoga; plus features poses and instructions.

Uta Pippig also recommends that beginners take a Yoga class for initial instruction from a professional. I have to say I agree. Don't try any poses without the proper guidance. You don't want to injure yourself while trying to prevent injury!

Posted by Shop New Balance at 10:54 AM 0 comments
Email ThisBlogThis!Share to TwitterShare to FacebookShare to Pinterest